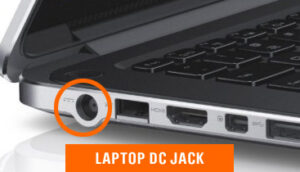 One of the most common problems with laptops that do not involve the operating system and internet issues are broken DC jacks. If you or someone you know has a laptop that isn’t charging, it might not be the battery or the adapter; it may very well be the DC jack on the side or in back and if so, it needs repair. If you are in the New Jersey area, can call on Dave’s Computers to help.

Here at Dave’s Computers, we have literally seen it all and that has given us the experience you need to help when you have a DC jack or other charging problem with your laptop. First, we will make absolutely certain that the problem is indeed a bad DC jack. If the laptop is not charging when it appears to be plugged in AND the jack is loose, most likely that is the problem.

The Most Common Culprit

Many laptop users have a tendency to assume that the problem is with the battery when their computer won’t power up or stay on, when they plug it in and there is not charging light illuminating. While there can certainly be a host of problems with batteries, especially secondhand or second rate replacement batteries for laptops, sometimes it can be something as simple as a DC jack problem that needs to be repaired.

There may be other issues as well that aren’t related to the DC jack, but when you can’t charge your laptop, you can’t turn it on and use it. Even with a dead battery that won’t hold a charge, as long as you have the power adapter plugged in, you’ll be able to use the computer.

No, this isn’t the title of a bad reality TV show. We want to explain why DC jacks tend to go bad and why they then need to be repaired.

Every time that your foot catches the adapter plugged into the wall, your laptop is jolted. This jolt is most destructive to the DC jack. The more times that you plug in and unplug the power cord, yanking on it, twisting it out at a sharp angle, and more, when you’re in a rush or because you don’t understand the important of unplugging your computer properly, you’re weakening the DC jack.

After enough time, the DC jack will become too lose to make the connection to the power supply and your power adapter won’t do anything but connect the laptop to the wall.

While it is true, you can do your own research and most likely have some luck shopping for a jack on eBay, it is also just as likely that you get a jack that is the wrong size. Any time that you open your laptop or other computer device without the proper tools (magnetic free screwdrivers, static guard, etc.), you’re putting it at risk.

You will also need to have the right tools in order to get the job done and as we all know, tools are very expensive these days. We at Dave’s Computers can fix your problem, and do it fast, and in many cases do it with a flat fee we can quote you over the phone.

Our technicians are up-front with you about any problems your computer may have and can quote you an affordable price for repair without any of those extra charges that tend to pop up with unscrupulous computer repair shops.

We have experience fixing:

How much does power jack repair cost?

How do you repair a power jack / dc jack on a laptop?

-Depending on the model, some require soldering other require replacement of internal cable. Both involve taking apart the entire laptop.