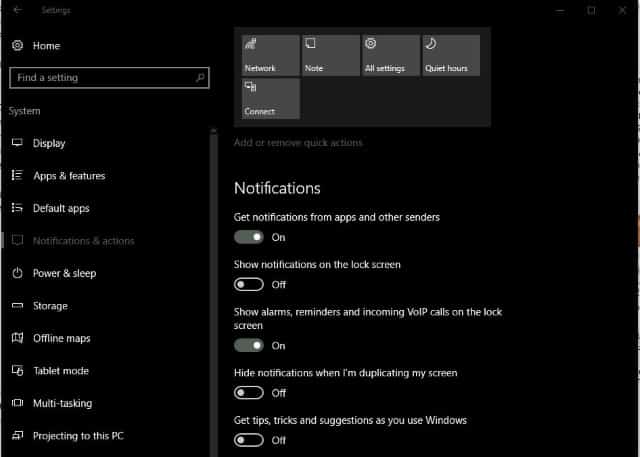 Have you seen the notifications within Windows 10 that Edge is safer than Chrome and Firefox? It seem an absurd claim but one that is intriguing quite a few people. I have personally spoken to a couple of friends who have retried Edge since seeing the popup and while they like what they saw, they aren’t sure if they are actually safer on the internet or not.

The most recent notifications began sometime in November last year. They include a popup within Windows itself regardless of whether you have Edge open or not. It says something like ‘Wanna earn while you browse? Get free movies and games with Microsoft Edge. See How.’

Another older ‘tip’ was an Action Center notification back in July 2016 telling users that ‘Chrome is draining your battery faster. Switch to Microsoft Edge for up to 32% more battery life.’

The latest one is ‘Microsoft Edge is safer than Firefox. It blocks 21% more socially engineered malware. Learn more.’ It is this one we are most interested in.

Turn off these ads

Before I get to whether the claim about Edge being more secure than Chrome or Firefox is true, let us turn off these types of ads.

This should stop these ads from being presented in the first place. You might want to toggle off ‘Show notifications on the lock screen too’ as these can be annoying too.

Is Edge really safer than Chrome or Firefox?

So back to the matter at hand. Is Microsoft Edge safer than Chrome or Firefox? It is an important question to answer considering how much time the average computer user spends online.

First it is important know the motive behind the statement. Despite Edge being many times better than Internet Explorer, it is still losing users by the million. Microsoft have a vested interest in bringing users back into its ecosystem as the ad revenue it receives is not insignificant.

However, just because there is a business motive behind the move does not mean it isn’t true. After many years of not even considering Microsoft browsers, that time may be coming to an end.

So what’s the evidence behind the claim?

Microsoft cite a study performed by independent outfit NSS Labs. NSS Labs offers threat intelligence to enterprise, so is well positioned to test browser security. The company tested Chrome, Firefox and Edge (along with five others) back in November 2016 to see which is most secure against Socially Engineered Malware (SEM). SEM is rife and is currently the main way end users are targeted by scammers. So any browser that can protect you from it is helpful.

The NSS Labs test found that Edge with SmartScreen blocked 99.9% of SEM while Chrome blocked 85.8% and Firefox blocked 78.3%.

So how does this help you as a user? SEM typically uses a fake email or IM to try to get you to click a link or visit a particular web page. Their coercion methods differ but can be anything from a fake email from UPS to a warning about Obamacare. These emails will contain a link to a virus or malware package that will automatically, and often invisibly, download onto your computer.

What the NSS test found was that Edge detected that these links were bad and stopped them more than Chrome or Firefox. Both competing browsers also have a version of SmartScreen but it seems SmartScreen is currently more effective.

So again, is Edge more secure?

The answer? Edge is still not necessarily more secure. Infected links are only a small part of cyber security. A browser on its own is not enough to offer truly secure surfing and neither should it be considered to be.

Edge has the advantage in that SmartScreen is seemingly better than Chrome or Firefox at detecting bad websites. It has the disadvantage in that it still doesn’t work with extensions and is pretty poor at blocking ads and managing privacy. It is also hardwired into Windows 10, so will also likely share your browsing data with Microsoft.

Chrome and Edge both offer sandboxing and automatic updates. Chrome updates are more frequent than Edge and Chrome works with extensions. Use a flash block extension, HTTPS anywhere, Ghostery, Adblock Plus and LastPass to drastically increase browser security. So while the core browser may be slightly behind Edge, using these extensions, or ones like them seriously upgrades security.

However, Chrome too falls behind in terms of privacy as Google tracks everything you do when using its browser.

Firefox is a little behind the ball but is catching up fast. It currently cannot sandbox and its own version of SmartScreen falls back further. It is also a little slower to start and run than Chrome. It also supports extensions including many good security addons. Firefox is also a serious privacy advocate and does not make money from customer data unlike Chrome and Edge. For that reason it is the main browser of choice for many security professionals despite its other drawbacks.

If you would like to learn more about how these browser stack up, this piece in IT Pro does a good job of comparing the three big players in a range of tests. Those guys seems to share my opinion that the most secure browser depends on how you use it and whether you use security extensions to enhance that security or not.

Firefox is said to be releasing a completely new version of its browser this year that will include sandboxing and a range of other updates that should make it even more viable. Edge is also being updated this year to work with extensions. They will be available through the Windows Store so will take a while to arrive and will likely to be limited to begin with.

Personally, I use both Chrome and Firefox with those extensions I list above. Both browsers work well and both perform admirably. Along with a good firewall and antivirus product, I think I am secure as I can be while online. How about you?