Wi-Fi vs. Ethernet networking which is best? | Dave’s Computers NJ 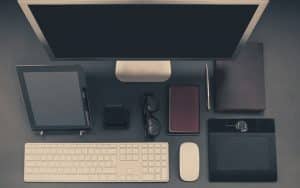 There is no doubt that we are gradually becoming more plugged into the internet. The rise of mobile ownership, tablets and the emergence of the Internet of Things has meant most homes now have a wireless network and multiple devices connecting to it. If you want to build a network for your home, which is best, Wi-Fi or Ethernet?

The team at Dave’s Computers has a mixture of both. I have both a wired network and a wireless one and use both for different things. Some devices cannot connect to a wired network. My cellphone doesn’t have an Ethernet port so can only connect through wireless. On the flip side, a PC has no need for wireless if it has a network card.

The single biggest benefit of Wireless or Wi-Fi networking is also the most obvious. It is wireless. That means no running Cat5 or Cat6 around the house, no digging cable through the wall or floor or having to repair plaster as you drill through ceilings or floors. Having no wires is a significant advantage in most situations and it is the primary reason Wi-Fi is so popular.

Other benefits include flexibility in who and where you can connect. If you want to connect to Ethernet (wired networks), you need to be close to an Ethernet port and have the cable to connect to it. With wireless, you can be anywhere within range of the network and need no cable. Friends can quickly connect without having to plug in, which depending on how sociable you are, is a big advantage.

Wi-Fi is now faster and more reliable than ever before too. At one time, wireless networks would drop, slow down, not connect and had all manner of issues. Now with better routers and endpoint devices, wireless is now fairly reliable and enables fast internet connections across a property.

The downsides of W-Fi networking

As always, there are downsides to every technology we use. The main downsides of Wi-Fi are that it is slower than wired networking, less secure and still less reliable. A newer Ethernet router is cable of Gigabit speeds whereas a wireless network will often be limited to 350Mbps or less. If you are close to the router, you may get more but average connection speeds are much slower for wireless.

Security is a big issue with wireless networking. Usernames, network names and passwords are transmitted across the air and can be intercepted easily by someone that knows how. Unless you use a secure, encrypted connection, your data and your network is vulnerable.

Reliability is down to the router and your property. Wireless signals use radio and radio waves do have difficulty penetrating thick walls or complex appliances such as A/C units or boilers. Wireless also has a habit of dropping out, clashing with other networks in the area and is susceptible to interference.

The main benefits of wired networking are speed, reliability and security. There has to be good reasons to go to all the trouble of cabling a property and these three reasons are just that. A wired network is much, much faster than wireless if connected to a relatively new router.

A router can work up to 1Gbps internally and if you’re lucky to live in a Google Fiber area, 1Gbps externally too. Considering the average sustainable wireless speed, that is many times faster. It is a sustainable speed too as long as there aren’t too many computers on the network. To put that speed into perspective, the average 50Mbps wireless connection will require around 15 minutes to download a movie. A 1Gbps connection can achieve that in less than 30 seconds if the source is fast enough.

Reliability. A wired network is not susceptible to interference, doesn’t care how thick the walls are or what A/C unit you run. It also doesn’t drop out when it feels like it. IPv4 is exceptionally reliable and with more routers playing nicely with IPv6, there is no reason for lost packets or dropped connections. There is also much less latency involved with Ethernet which is a big benefit to gamers or those who stream movies.

Security. The only way someone can compromise your network security is if they physically access your network or compromise a computer connected to it. It is far more difficult to hack a wired network than a wireless one.

The main downside of Ethernet networking is the expense and hassle of cabling. If the property isn’t already cabled, there is a lot of work involved to cable every room. Apartments are usually fine as you can run a Cat5 or Cat6 cable from one room to another without drilling or plastering.

If you want to run the cables invisibly, the work increases exponentially. Trunking works if you don’t want to drill holes in the property but doesn’t look very attractive. Otherwise, you will be lifting carpet or pulling skirting to hide the cables from view.

So which is best?

Well the title did say ‘Wi-Fi vs. Ethernet which is best?’ The answer to that depends on how you use your network. If you’re all about convenience and flexibility but not so worried about speed, wireless wins. It can be set up in less than an hour and allows anyone to connect from (mostly) anywhere in your property.

If you are more concerned with speed, reliability and security, ethernet wins hands down. It is a hassle to set up but once done, remains in place until you need to move. It is harder to hack, many times faster, has less latency and is very reliable.

Of the two, I would always suggest Ethernet wherever possible. Yes it is a pain to cable a property, but once done, it is done. Then you get gigabit speeds within the property and maximum internet speed too. With a good quality router with built-in firewall, secure passwords and software firewalls on each computer that connects, you have a secure home network that should offer everything you need it to with the minimum of fuss. Plus, if your router has wireless capability, you can have the best of both worlds!

If you need help configuring a network or setting it up, contact Dave’s Computers in Hillsborough, New Jersey. We would be happy to help!